Social Engagement and Reach with an
Incredibly Creative Social Campaign

Resulting in a total increase of 124%

Families created their own hoodoos out of items they found in their homes and posted them on social media. #HomemadeHoodoos not only created an educational teaching experience for children but also made a fun, creative experience for those looking for something to do at home. Hoodoos were made with blankets, pillows and couch cushions, sidewalk chalk, drawings and more! 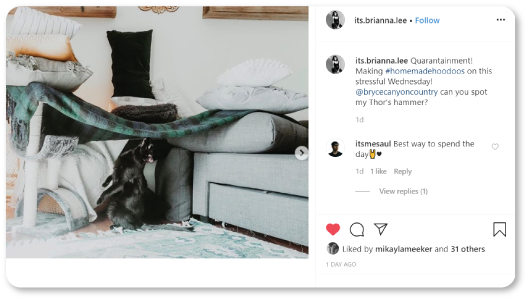 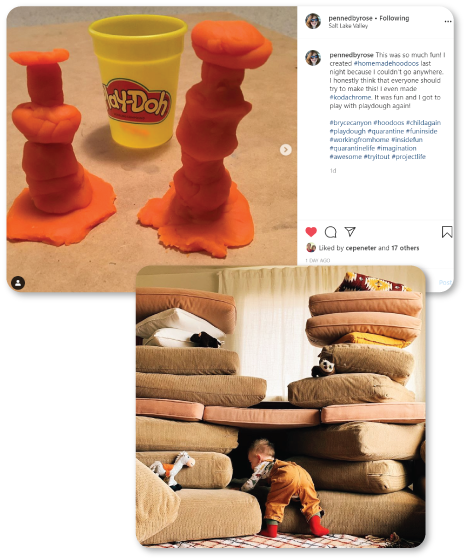 The organic social media campaign ran from March 11 to March 31, 2020, as the main message at the time was to stay home and stay safe. Relic posted this campaign on the Bryce Canyon Country social media pages and employees posted on personal social media pages. Additionally, Relic’s PR team emailed a pitch to influencers and media outlets to promote the campaign for earned coverage. Near the end of the campaign, Relic posted again on Bryce Canyon Country pages and pitched one more time to the media to follow up.

Coinciding with #HomemadeHoodoos, Relic ran paid social media ads on Facebook and Instagram. The team used soft social branding using previous assets and relaxed calls-to-action while waiting to launch a recovery campaign message. This was in response to navigating the pandemic and developing a crisis communication plan with Bryce Canyon Country. Relic was able to craft an appropriate message to show that Bryce Canyon Country understood its visitors and the difficulties they were facing at the time. 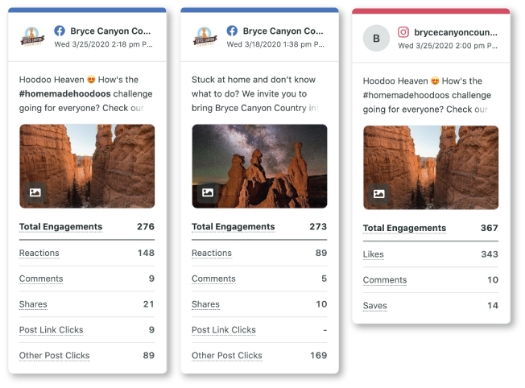 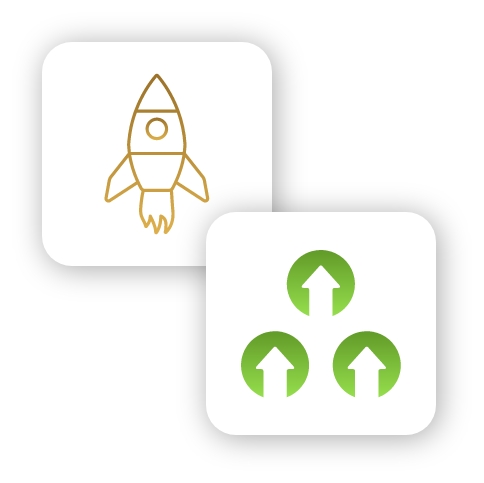 The results from both the organic social media and paid social ad campaigns proved extremely successful.

Additionally, the paid social media ads increased direct traffic to the Bryce Canyon Country website by 288% in a single day. Direct traffic remained high in the following week. This impressive jump in numbers in one day shows the potential for social ads to affect off-social behavior. The message, urging visitors to plan a trip when it was safe in the future, was timely and showed Relic’s ability to pivot in times of crisis.

Relic completed an effective, fully-integrated social media campaign with #HomemadeHoodoos that promoted hope and creativity while staying home during a turbulent time. The goal of this campaign was to increase awareness of Bryce Canyon Country and encourage travelers to consider visiting the park once it was safe to do so. Relic used the RACE method (Research, Analytics, Creation, Execution) to determine whether the campaign would be effective. The success of this campaign was measured through social media analytics, media coverage and direct website traffic. Through a cross-departmental campaign, internal teams managed to collaborate in a new work-from-home environment to create joy and hope for future visitors to Bryce Canyon Country.

Navigate your destination social campaigns with an ad agency that knows what you need from your partnerships.

If you’re interested in taking your destination social campaigns into new territory and seeing incredible levels of success like Bryce Canyon Country… we need to talk.