How Relic PR Helped
the UVHBA

Accomplish Its 2021 Parade of Homes Goals

Number of journalists who wrote about the parade

Positive sentiment for all published articles

Publications that picked up the ‘Women in the parade’ story

Views of the ‘Women in the parade’ story 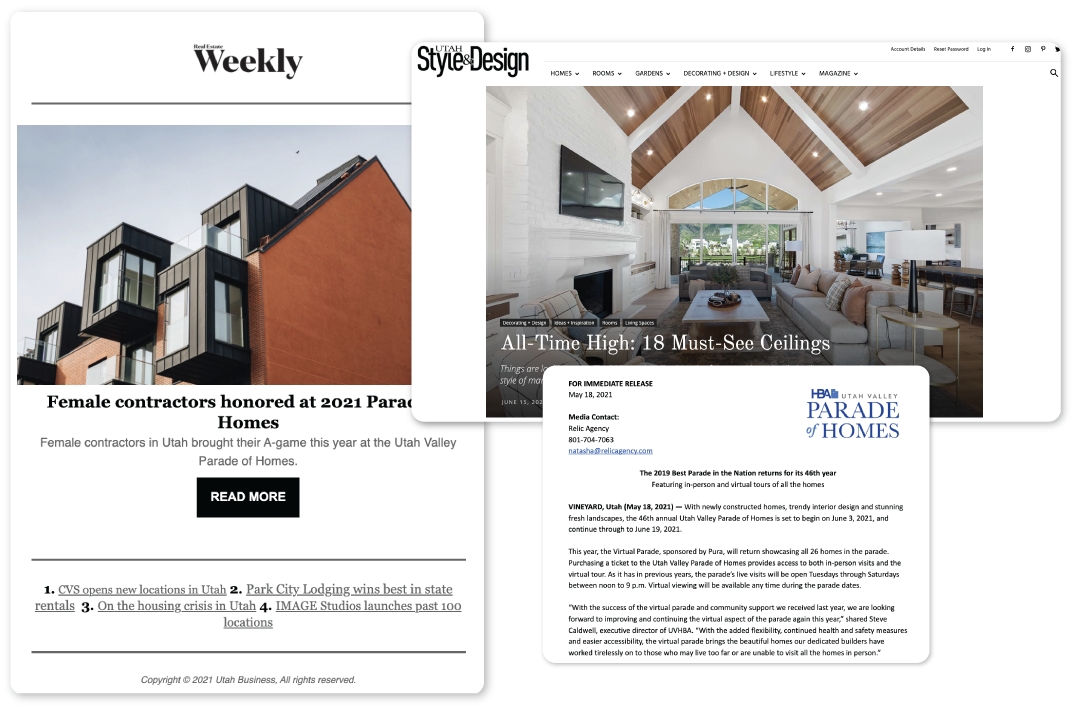 In 2019, the National Association of Home Builders named the Utah Valley Parade of Homes the best parade of homes in the nation. Utah Valley Home Builders Association (UVHBA) felt pressure to carry on its impressive legacy in 2021 after a turbulent 2020 season. UVHBA still saw success in 2020 by providing a virtual parade, but hoped to increase in-person visitors in 2021. As UVHBA’s agency of record, Relic stepped in to assist with public relations efforts. UVHBA’s goals were to continue previous years’ success, expand to markets outside of Utah and increase revenue. Through press releases and social media videos, Relic used public relations to achieve UVHBA’s 2021 Parade of Homes goals. 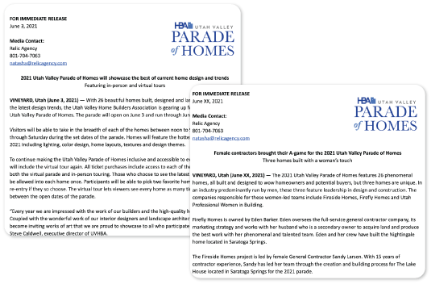 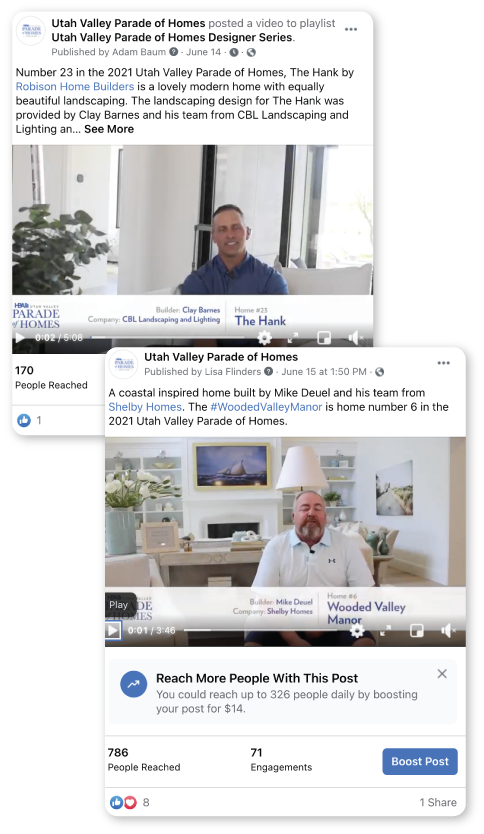 Relic’s first step in developing an effective public relations plan was to make a content calendar. This allowed the team to organize the tasks for UVHBA and stay on track with deadlines. The team also decided on messaging and angles that media outlets and readers would find the most interesting about the parade. Relic’s PR team then researched potential journalists to send pitches. In doing so, the team created local, regional, national and blogger media lists to separate individual pitches.

The Relic PR team wrote three press releases about the Parade of Homes. The local press release provided information about the parade and let locals know how they could attend. The regional press release discussed home design trends and encouraged people to view the homes on the website. The national press release highlighted women of the UVHBA Parade. Three of the parade homes had strong ties to women’s leadership. The House That She Built was built entirely by women — from general contractors to interior designers. Another house was built by a woman-owned company. The third house’s general contractor was a woman.

Relic sent the journalists press releases to spread the word about UVHBA’s Parade. As a result, 18 journalists wrote about the parade for their publications. This was a 3x increase in the coverage from 2020. UVHBA especially wanted its story in Utah Style and Design Magazine. Thanks to Relic’s efforts in working with the magazine, Utah Style and Design published five stories about the parade. Other articles were featured in Blog Lovin’, Provo Daily Herald, Deseret News, Utah Valley 360, Standard Examiner, Home Accents Today and more. Article sentiment was 86.7% positive and 13.3% neutral. The articles received 1,712 engagements including likes, comments and shares.

Navigate your parade of homes PR strategies with an ad agency that knows what you need from your partnerships.

If you’re interested in taking your parade of homes into new territory and seeing incredible levels of success like Utah Valley… we need to talk.