Seven posts had
impressions of over…

Seven posts had
engagements over…

In 2020 Bryce Canyon Country, with Relic, decided that improving their social media engagement would help them stay connected to their visitors and help everyone experience the beauty of the destination. Relic’s top strategy was implemented for organic social media using a content curation approach through Facebook. Relic gathered existing photos and blog posts from talented users who had tagged Bryce Canyon Country and shared it with their followers. Relic also sent invitations to like Bryce Canyon Country’s page to as many people as possible who engaged with their posts.

The goal of this campaign was to increase followers, and beyond that vanity metric, Relic wanted to share the beauty of Bryce Canyon Country and create a strong social community online. 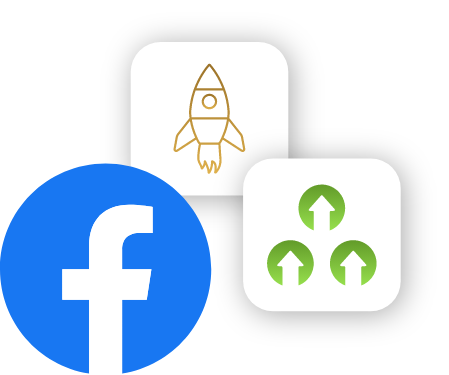 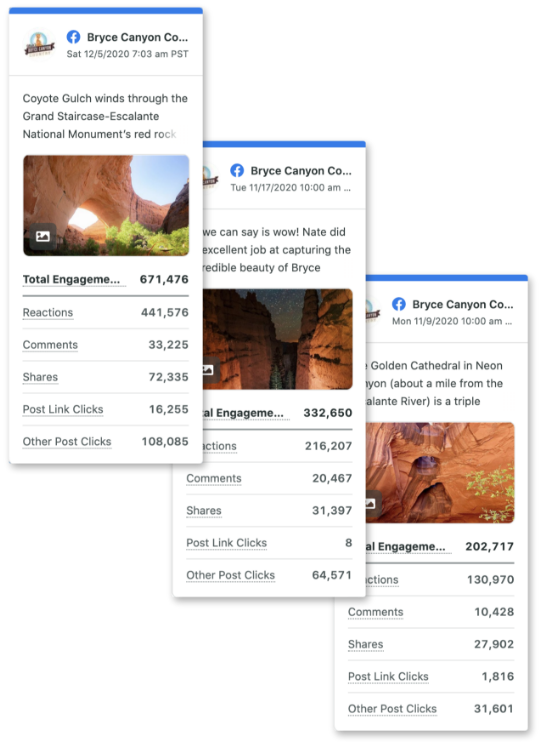 Relic found the content through Instagram by researching hashtags and specific location tags. Tags like “Bryce Canyon National Park” and #brycecanyon were avoided because the results were far too wide. Instead, Relic looked for specific local communities like “Hanksville’’ or “Factory Butte.”

The biggest challenge encountered was finding original content that was unique from other photos that visitors typically take when visiting the area. Much time was spent finding eye-catching images that would stand out on Bryce Canyon Country’s platform. Permission from users was needed before posting their content to Bryce Canyon Country channels and sometimes they would not respond.

The goal was to increase Facebook metrics including reach, shares, engagements, and comments. In addition to those post metrics, Relic also aimed to increase the number of people who liked Bryce Canyon Country’s Facebook page. No money was spent to boost posts. Instead, new followers were gained from organic posting. The target audience was quite broad because of aiming to reach everyone who enjoys the outdoors, national parks, and travel. Because Relic didn’t run any advertisements, all of the new followers were those who organically found the page.

The campaign was measured in engagement statistics. The results have blown Relic away. The goals have been achieved and stretched beyond expectations.

In the past, Relic had been taking the content creation approach for Bryce Canyon Country. By switching to content curation, Relic was able to grow an engaged audience for their client. Furthermore, Bryce Canyon Country has been able to grow a stronger community because they are actively sharing content from their followers. Now, it encourages their followers to tag them in their work and share their page and destination with their personal followers.

Navigate your destination social initiatives with an ad agency that knows what you need from your partnerships.

If you’re interested in taking your user generated content and social media management into new territory and seeing incredible levels of success like Bryce Canyon Country… we need to talk.