How the Hola
Laredo Podcast

Used Social Ads to Drive Their
Listens to Incredible Levels

In March 2021, Relic created a social media ad campaign for Visit Laredo’s “The Hola Laredo Podcast.” The goal of this effort was to increase awareness of the podcast and bring in new listeners. In 2020, Relic partnered with the Laredo Convention and Visitors Bureau to launch the podcast which highlights Laredo’s culture, history, and unity. A member of Relic’s content team and Aileen Ramos, director at Visit Laredo, host each episode. 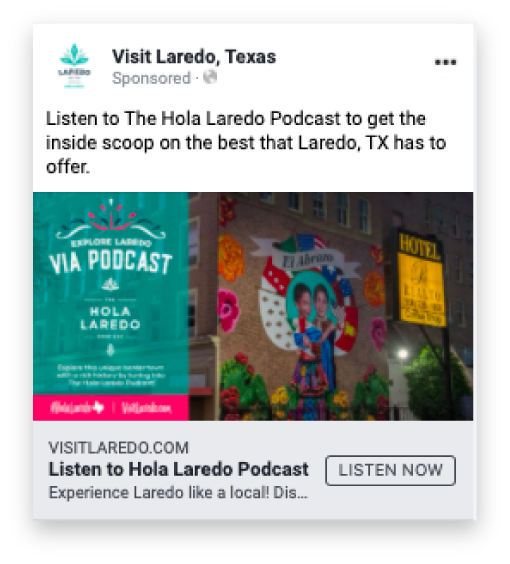 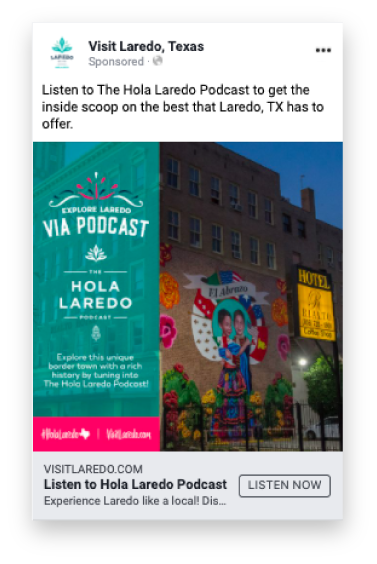 The Facebook and Instagram campaign ads ran from March 15 to April 9, 2021. During this period, the podcast showed exceptional results with 657% growth in total listens. The campaign generated new listens at a cost of less than 50 cents each. On the first three days of the campaign launch, the podcast landing page received 9,692 impressions, 82 link clicks, and 8 new subscribers.

The top episodes during the campaign were “A Walk Down Laredo’s Main Street,” “A Taste of Lattes in Laredo,” and “Bringing the Heat with Laredo Soccer.” Each of these episodes reached almost 300 total listens. The cities with the highest listenership included San Antonio (29.2%), Dallas (15%), Austin (9.0%), Houston (5.4%), and Laredo (3.4%). The data also revealed that 65% of people listened on mobile, 25% on desktop, and 10% on tablet.

The social ads led to an increase in podcast listens, subscribers, and brand awareness.

The creative team created the social media ads. The digital specialists used simple ad post copy encouraging people to listen to the podcast such as “Experience Laredo like a local! Discover the unity, history, and culture through “The Hola Laredo Podcast.”

The digital marketing team at Relic decided to target large cities in Texas. They determined that San Antonio, Austin, and Dallas had the highest chance of reaching potential listeners. All smaller cities within a 25-mile radius of the larger cities were included in the ad reach. The digital team targeted all genders ages 18 and older. The ads reached people interested in travel and road-trippers who listen to podcasts. They also reached people living in Laredo and those who had recently visited.

The extensive reach of these ads proves the effectiveness of digital marketing efforts to gain new podcast listeners and subscribers. The simple design and copy drew in people interested in learning more about Laredo. Visit Laredo and Relic were excited about the podcast’s daily and overall results during the campaign. “The Hola Laredo Podcast” continues to grow with the release of each episode. 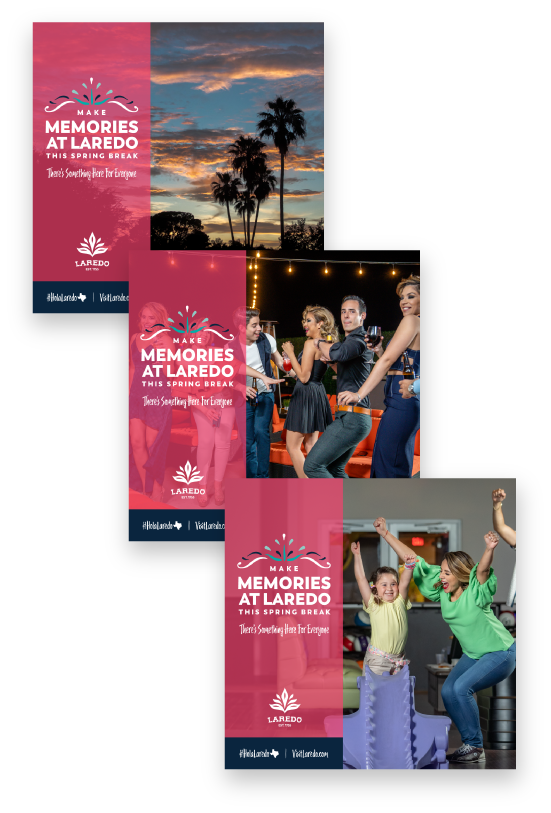 Navigate boosting your podcast listenership with an ad agency that knows what you need from your partnerships.

If you’re interested in taking your podcast listens into new and exciting territory and seeing incredible levels of success like the Hola Laredo Podcast… we need to talk.